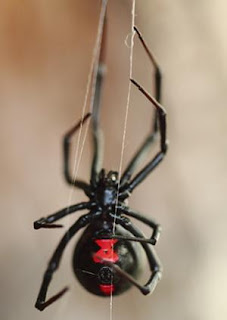 Almost everyone finds the children’s book, “Charlotte’s Web,” endearing, with its spider heroine.  In real life though, very few people, it seems, enjoy spiders.  While I love bugs, I too am not a huge fan of spiders.  They fascinate me at a distance.  However, a couple of weeks ago at the fair, I had the opportunity to capture a black widow spider to remove it and other people from harm’s way.  So, let’s talk about the black widow spider a bit more because it is the only poisonous spider found in Montana, without being transported in by some means.


The black widow spider is easily recognized by the hourglass marking on the underside of the abdomen.  This marking is reddish or orange on live specimens, but loses its color when preserved in alcohol.  Black widow spiders get their name from the fact that the female frequently eats the male after mating, a practice not uncommon to several other species of spiders.
There are at least two species of black widow spiders in Montana, the northern black widow and the western black widow.  They are distinguishable by their color markings.


The bite of both the western and northern black widow is a neurotoxin and is very painful.  The pain occurs less at the actual bite but rather in the abdomen and limbs.  Physiological effects are an accelerated heartbeat, increased blood pressure, breathing difficulties, and paralysis.  When death occurs, it is due to suffocation.  Although the bite of a black widow is rarely fatal it is important to seek medical attention.  Antidotes are commercially available.
Spiders are beneficial, preying on insects, so control measures should only be used in situations where they become intolerable – for instance, where black widow or other spiders pose a threat to individuals or pets.  A broom or vacuum cleaner used to dislodge and move outside or crush spiders will suffice.  Keeping debris and wood piles away from living quarters will aid in limiting food sources and spider havens.  Spiders are often found outside under eaves and in corners of residences.  By carefully manipulating a broom, one can remove the spiders and relocate them away from the house. 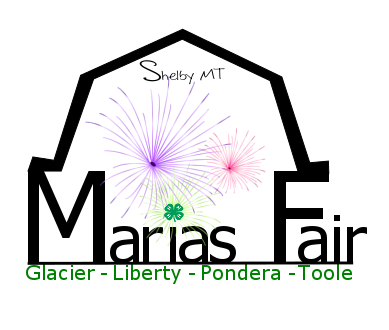 
4-H market goats are new to the sale this year and join 4-H market swine and market lambs in being harvested and processed at Lower Valley Processing in Kalispell.  Lower Valley Processing can be reached at 406-752-2846.
All kill and processing fees will be the responsibility of the buyers as you make arrangements with your processors.  This amount will be included at the time you pay for your packaged meat.  Kill fees for cattle are $90, swine are $40 and lambs and goats are $80.  The lamb and goat fee includes the processing fee as well as the kill fee.


All animals from the 4-H Market Animal Sale being cut and wrapped at Lower Valley Processing will be coming back to Shelby one time only on Thursday, August 2nd from 8:00 to 9:00 a.m. and can be picked up H & O Motor Supply, 100 Main Street.  It is the responsibility of the buyer to make arrangements to pick up their meat at that time.  Other arrangements for meat processing with other facilities are the responsibility of the buyer.
“Buyback” animals will be handled in the same manner as previous years.  This is when a buyer wishes to donate the animal they purchased at the sale to a 4-H entity.  The sale flyer always includes a list of the Marias Fair Committees and county 4-H councils that animals can be donated to.  The youth selling the animal receives the entire amount of the purchase price.  The committee then resells the meat and receives the market price for the animal.


The 4-H Livestock Committee is thanking buyers from the past few years with a new Pre-Sale Social on Saturday, July 21 from 1-2 p.m. at the Seewald Barn.  We encourage you to come and visit with our 4-H youth over appetizers and pick up free tickets to the 4-H Food Booth.  These are worth a special and a drink, and can be redeemed at any time during the fair.  The Food Booth serves a great lunch and dinner Wednesday noon through Sunday afternoon.  Profits from the Food Booth are returned to the fair exhibitors as premium money.
The 4-H Livestock Committee appreciates your support of the Marias Fair and of the 4-H youth.  If there are questions or concerns regarding the 4-H Market Animal Sale, please feel free to contact Jesse Fulbright at 759-5625 or Kari Lewis at 873-2239.

Don't Wig Out Over Earwigs! 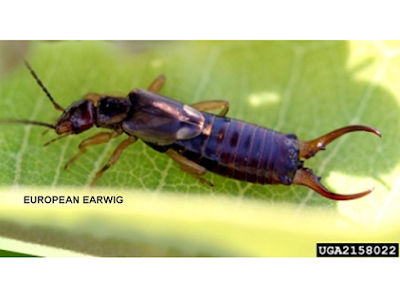 Earwigs mainly are a nuisance pest.  Their reputation is made worse by the widespread fear that many people have regarding these insects.  Several tales exist concerning alleged damage of earwigs: how they like to crawl into ears or how the forceps cause a painful pinch.  These stories have little basis in fact, although earwigs have been known to cause a mildly painful bite when sat upon or handled.  More than likely, their name comes from the fact that their wings are shaped like ears.
Earwigs like to live in dark and humid spaces and are active at night.  They are predators of other insects and they often feed on plant matter from leaves and flower petals to supplement their diets.  There is one generation of European earwigs but there are several earwigs present throughout the growing season.


Earwig control can be challenging.  Trapping can be effective, especially when combined with baits.  Many earwigs can be trapped which may help reduce numbers.  Traps can be of various designs but should produce dark hiding areas that the earwigs will seek out for daytime shelters. Rolled corrugated cardboard can be very effective, as can rolled or crumpled newspapers. Furthermore, the addition of some food bait within the shelter can greatly improve the use of a trap by earwigs.  Modifying the habitat to reduce available shelters for the earwigs can also help.  There are also insecticides available, including bait formulations, that can help reduce earwig numbers.  Bait formulations containing carbaryl as the active ingredient are listed as being effective. These are broadcast around the base of plants and are eaten by the insects.  Bait formulations are generally considered a means of using insecticides that have more selective effects compared to sprays.
Posted by North Central Montana MSU Extension at 1:00 PM No comments:

Thank your farmer and rancher this Independence Day!


In honor of Independence Day today, I thought I would share some data on the cost of the average
American cookout.  The typical American cookout of hot dogs, cheeseburgers, ribs, potato salad, baked beans, chips, watermelon, lemonade, and chocolate milk is coming in at approximately $5.57/person which is down 1% from last year.  You might be interested to know that the farmer’s share of that 4th of July meal is only around $0.87/person.  Keep in mind that in this case the ‘farmer’ means the rancher who produced the beef, the pork producer, the potato farmer for the potato salad and chips, the farmer who grew the beans, the wheat producer who grew the grain for the hamburger and hot dog buns, the watermelon farmer, the dairy producer who produced the milk, etc.  That $0.87 that goes to the farmer is likely divided up between 6 or 8 different farmers from various industries.


So, where does the other 85% of the cost for that 4th of July BBQ go?  The remaining $4.70 of that meal is tied up in marketing, processing, wholesaling, distribution, and retail expenses.  It is clear the American farmer is incredibly efficient and productive.

It is also interesting to consider just how little the American consumer spends on food compared to consumers in other countries.  In 2014, Americans spent just 6.5% of their household expenditures on food.  In comparison, Japan was 13.5%, Mexico was over 23%, Egypt was 36%, and Nigeria was nearly 60%.

We have much to be thankful for this Independence Day, most notably our freedom.  However, let’s also thank the American farmer and rancher for our safe and abundant food supply.

Please also note the following upcoming events:
This Friday, July 6, Roger Sammons is inviting producers to a ground-breaking ceremony at the Pardue Grain elevator (12 miles west of Cut Bank) at 11:30 a.m. for their pulse crop processing facility.  Numerous dignitaries, etc. will be on hand, and lunch will be provided.

Wednesday, July 11 is the Glacier County Conservation District Crop Tour.  Producers should meet at the Cut Bank Civic Center at 2 p.m. to board the bus and will then head out to view canola plots at Eneys, wheat varieties at Bradleys, and barley plots at Sutas.  Following the tour will be a free BBQ by CHS at the City Park at 6:30 p.m.  The event is free and pesticide points have been applied for.  Please RSVP with Tabi at 873-4292.
Posted by North Central Montana MSU Extension at 4:51 PM No comments:

The 4th of July is a fun holiday, one that remembers the founding of our country and celebrates that occasion with gusto.  With celebrations in full effect on the night of the 4th I wanted to help everyone keep it a safe holiday by providing some safety tips about fireworks. 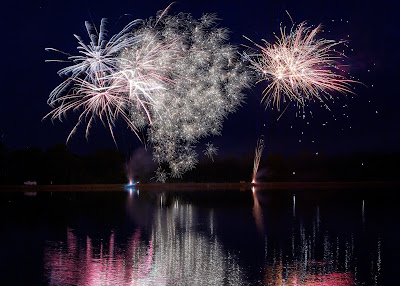 As we’ve become quite the animal house over the past year with the addition of a cat and a dog, let’s talk about their safety first.  Many animals, especially dogs, run away and get lost over the firework season.  According to Extension sources, it is easy to understand why if you consider fireworks from the dog’s point of view.  In the article, “Why are Dogs Scared of Fireworks? 11 Things You Should Know,” dog behavior scientist Ragen Mcgowan says one of the reasons is that a dog’s acute sense of hearing makes them more sensitive to fireworks then we are.  They are much louder to our pets.  Another reason is while we expect to hear a loud boom during a firework show, dogs do not and can be very startled.  Similar to our reaction when we get startled by a very loud noise, their heart rate races, they have a surge in adrenaline and they experience a sudden increase in a stress hormone circulating throughout their body, which causes them to run away.  Fireworks are also very different then thunderstorms.  Storms come with a lot of warning signs, including a change in the barometric pressure and high winds, so they can anticipate the storm.  If you find yourself with your pet around fireworks, stay calm.  Staying relaxed and calm shows the dog there is no danger.


With children around, remember that while they may want to participate in lighting off fireworks, that is the adult’s job.  In the excitement of the lights and loud sounds, sometimes we forget that young children can suffer injuries from sparklers.  Sparklers burn at temperatures of about 2,000 degrees, which is hot enough to melt some metals.  When you as the adult are preparing to light a firework never place any part of your body directly over a firework when lighting the fuse.
Have a safe and fun 4th of July this year!