As our growing season progresses, different insect pests and diseases may begin to pop up.  One of those pests to be scouting for would be the pea leaf weevil.  If you are wondering what to do about potential pea leaf weevil damage I have some information to share with you this week about the pest and potential control measures. 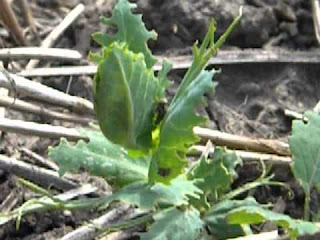 The adult weevils feed on the leaves, chewing a halfmoon-shaped notch in the leaf edge.  Defoliation typically does not cause economic damage since the crop usually compensates and recovers.  However, when weevil populations are high and the plants have only recently emerged, adult feeding can cause considerable damage.  Yield loss is believed to occur because of larval feeding on the nitrogen-fixing root nodules.  High pea leaf weevil populations may destroy up to 90% of the root nodules.  While adult weevils can feed on a wide variety of legume plants, the larvae only survive to adulthood on the root nodules of field pea. 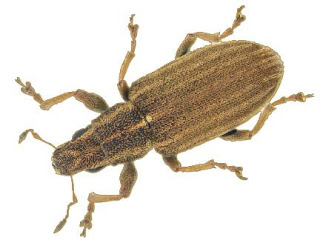 Pea leaf weevil is not to be confused with pea weevil, which is a different pest of peas that has a similar common name.  Pea weevil lays its eggs on the developing pea pod and the larvae consume the peas inside, and the adults are very different in appearance.

Back to the pea leaf weevil now.  Pea leaf weevil adults primarily overwinter in surrounding roadsides, shelterbelts and perennial legume crops such as alfalfa.  Feeding damage to the leaves is often first noted on the field edges.  Migration into the crop may last for several months and is influenced by spring temperatures.  After a period of feeding, female weevils mate and scatter eggs over the soil.

Preventive insecticidal seed treatments protect the root nodules from larval feeding and the foliage from adult feeding.  However, the decision to treat seed should be based on the history of weevil damage in previous years, since planting occurs before pest activity can be monitored.  Foliar sprays can be applied before the 6th node growth stage.  The economic threshold for spraying is reached when ¼ to ⅓ of the plants have feeding notches on the clam leaf (the most recently emerging leaves that are still folded together).  A row of 10-20 seedlings should be examined at several locations, including the interior of the field, to establish an average number of plants with feeding damage.  Foliar sprays must control the female weevils before they lay eggs to prevent yield loss caused by the larvae.  Some results suggest that seed treatments provide better control compared to foliar sprays, since sprays may not always control the adult females before egg laying occurs.
Posted by North Central Montana MSU Extension at 1:00 PM