Now is the ideal time to prune many trees and shrubs as this time in the late dormant season is when severe cold has passed, but new growth has not yet begun.  This dormant season pruning typically enhances the plant’s vigor, and will stimulate new growth.  In addition, pruning now will provide the trees and shrubs the entire growing season to recover.
When a shrub flowers determines when is an appropriate time to prune that shrub.  Shrubs that bloom on current season’s growth which would be ok to prune now include Peegee hydrangea, potentilla, shrub rose, snowberry, and Hills of Snow bushes.

One exception to pruning shrubs this time of year includes shrubs grown primarily for their flowers that that bloom in the spring.  Spring flowering shrubs are any shrubs that bloom at the same time or before the lilacs bloom.  These spring flowering shrubs bloom on LAST year’s growth, so should be pruned right after flowering.  Examples of these are honeysuckle, rhododendron, lilac, and rambling rose bushes.

If you are wanting to prune shrubs into a hedge, small shrubs that are 1 to 3 years old should be cut back to about 3 to 5 inches above the ground to encourage growth of new shoots at the base.  If you have older shrubs that you would like to transition into a hedge, cut back one-third from their tops and sides to help develop a full, bushy hedge. 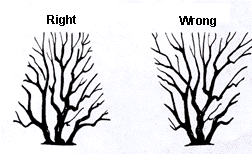 The main thing to remember when pruning a hedge is that the ideal hedge is wider at the base than the top.  A hedge should look like a truncated cone shape.

If you prune any infected branches while pruning, make sure to clean your pruners with rubbing alcohol after each cut so that the pruners don’t transmit the disease to another portion of the hedge or to the tree you prune next.